Free UK Delivery on orders over £30

How to Maintain Grey Hair – 6 Steps to Silver Success 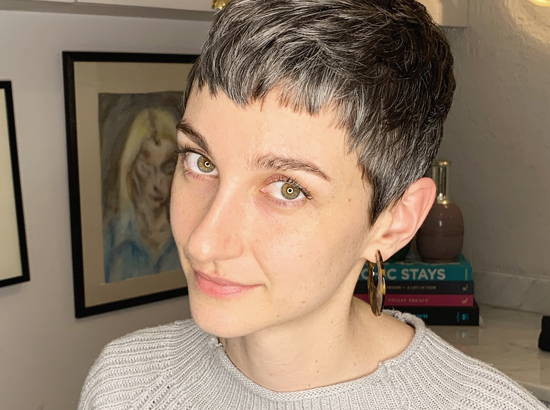 As the rising trend has proved, going grey is no longer a point of shame. Silver hued locks can be seen on people of all ages and hair types, no longer confined to those who are embracing their natural hair changes.

Josh, who helped to start the trend, believes that the growing popularity of both natural and coloured grey hair has been aided by our changing attitudes towards what is considered ‘socially acceptable’, and the availability of professional advice.

“Growing up, my grandma used to go have her hair shampooed and set every week, and every four weeks she’d have her hair coloured,” says Josh. “It became almost like a utility to her, this idea of covering grey hair. Today, that is such an old-fashioned concept – the idea of completely blanketing out the grey hair denies one’s personality.”

“The second shift comes from the rise of different platforms, where women can talk to each other and talk to experts. Although there is still a reluctance to talk about going grey – what one does to maintain or reveal it/conceal it – we are coming into an age where women can feel more confident about it.”

With that in mind, we have listed some of what we consider to be the most important steps to maintaining both natural and coloured grey hair with success.

Make sure to suit your skin tone

With any colour, finding the right shade to suit you comes down to skin tone. The right shade of grey hair can help to highlight and accentuate your features, but get it wrong and you could end up looking washed out.

People with light eye shades like blue, grey and green tend to suit cooler, icy hair shades like platinum and silver, whilst those with darker eyes might find they suit deeper, darker grey hair tones like pewter or mink. But, if you’re looking to make a statement with your grey hair, don’t be afraid to experiment. Warmer skin tones can sometimes look very striking when contrasted with light hair, and an ombre hair with darker, steely roots can suit cool skin tones just fine.

Booking in a consultation with one of our hair colouring experts before your appointment at Josh Wood Colour can help you make an informed decision about making the right choice. 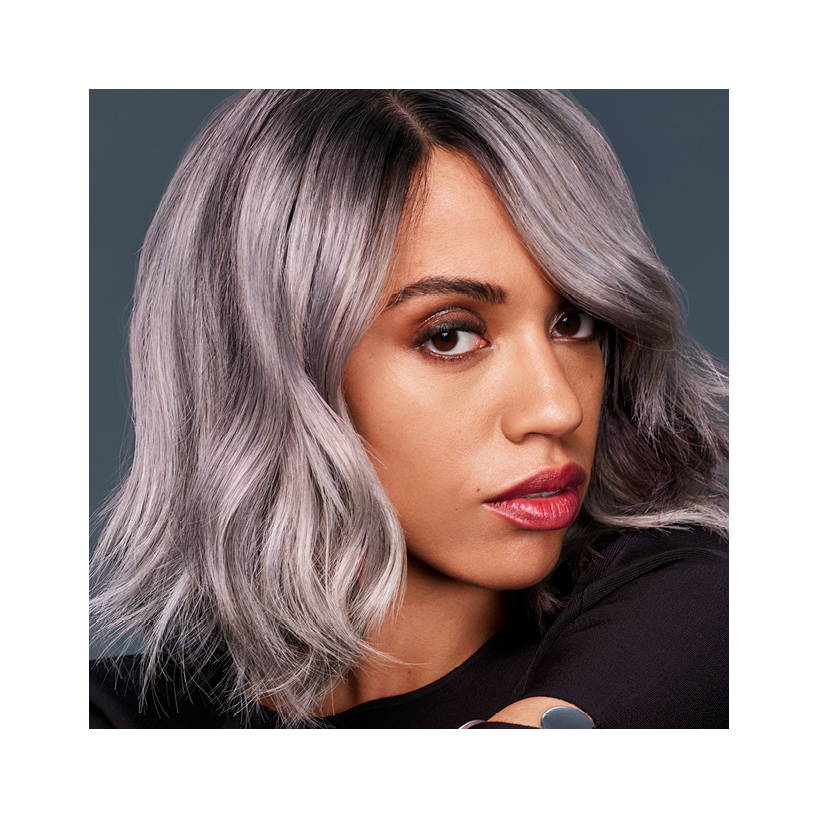 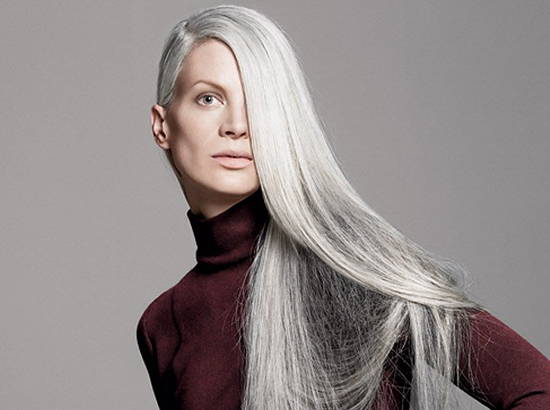 Grey hair is more susceptible to looking dull or tarnished from daily wear and tear, whether it is natural or coloured. A good hair care regime should support keeping the natural tones in your hair to stop the colour looking dense or flat.

Josh says the key to maintaining grey hair is to keep it “light and effervescent, and clean and shiny and silky,” by using shampoo and hair conditioner that is specially formulated for blonde or grey hair to avoid developing yellowish undertones over time. Look for products that are sulphate free like our Fine and Frizzy Blonde Care ranges, and be sure to use a violet toner or treatment, like our Icy Blonde Gloss Hair Treatment  to remove unwanted brassiness and nourish hair in between salon appointments.

Keep your hair hydrated and healthy

Ever noticed that your greys are a different texture to the rest of your hair? Grey hair tends to be thicker, coarser and more wiry than other hairs, and can even be straighter or more frizzy.

“Your natural grey hair is often in better condition than your coloured hair but, due to the texture of grey hair, it can look worse,” says Atelier Creative Master Stylist Matt Hawes.

“Grey hairs naturally have an open cuticle, unlike tinted hairs where the cuticle has been chemically shut. This means that grey hairs can often look dull, frizzy and in bad condition, in comparison to tinted hairs.”

Bleaching hair also lifts the cuticle, which means that keeping your hair hydrated is a must for all. Using a weekly deep conditioning treatment like our Everything Mask helps to keep your hair moisturised, and smooth down the cuticle to make your hair more manageable and resilient. 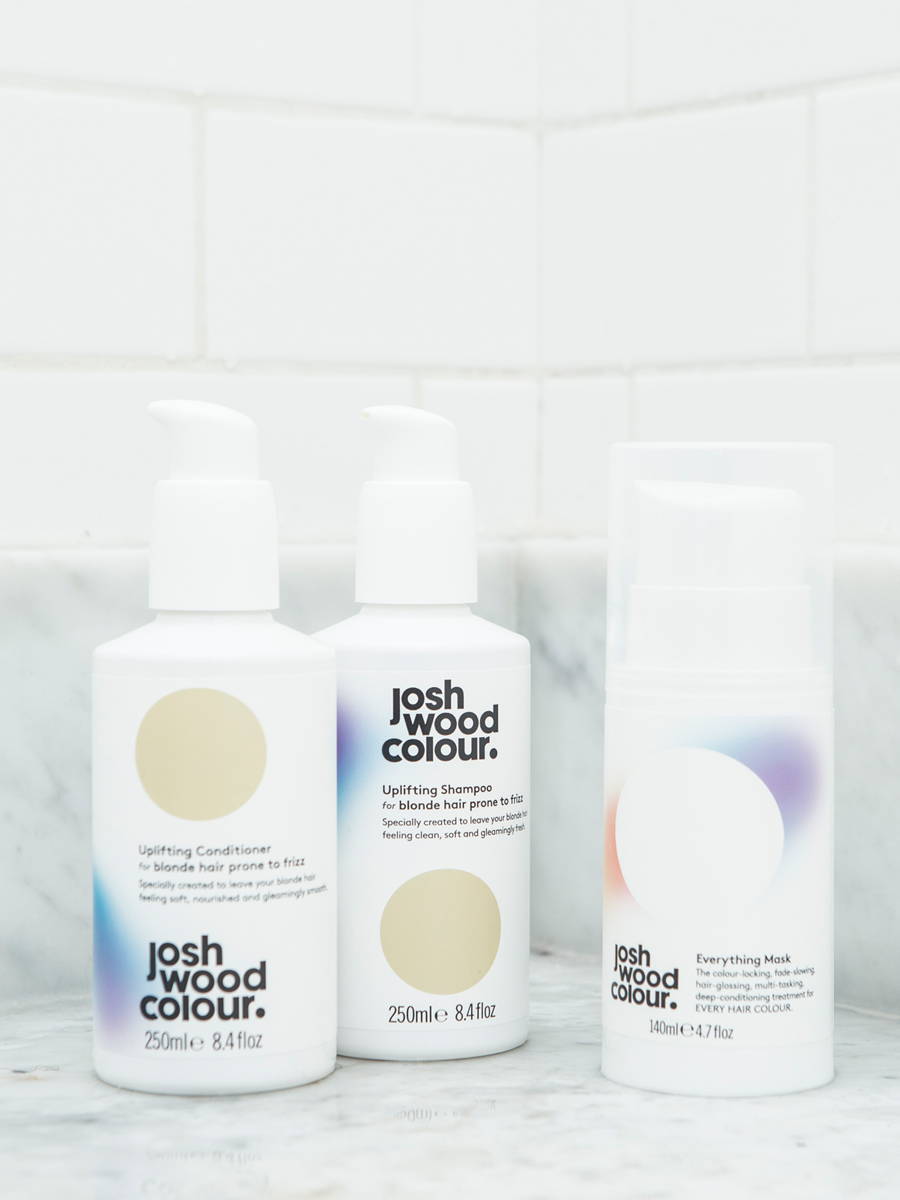 Blend it through with Balayage 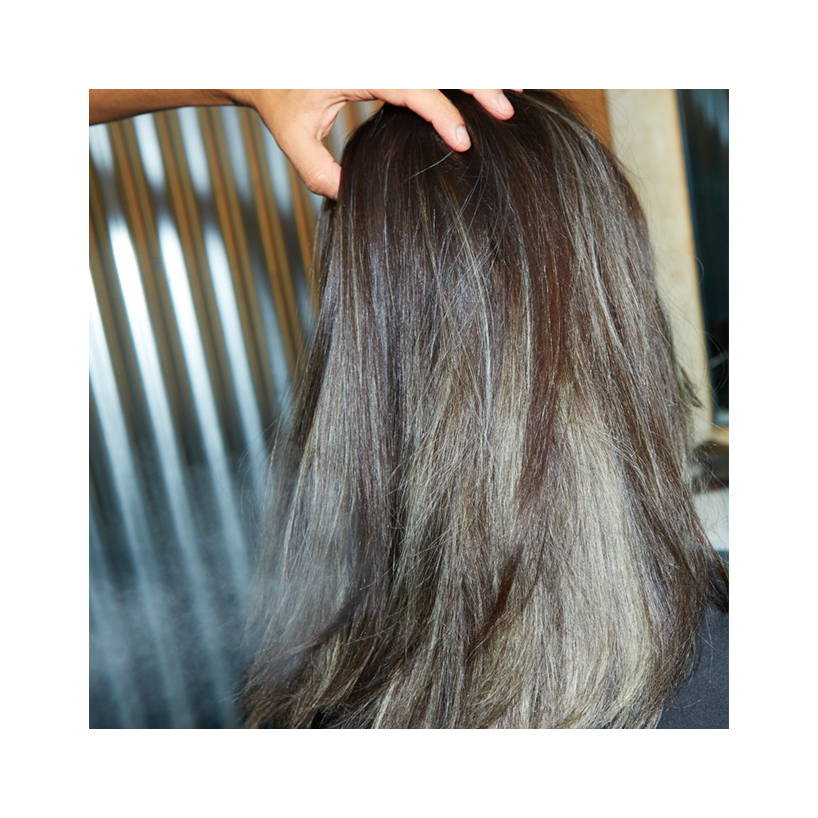 If you’re making the switch from coloured hair to embracing your natural roots, the in between stage is the hardest.

“Most people will need a little bit of help after they’ve grown out their hair colour as it’s rare to grey evenly,” says Josh. “I would always advise that adding some highlights or lowlights for contrast will always make your natural grey hair look more premium.”

If you’ve been dying your hair darker for some time, or your natural hair pigment is dark, patience is key. High lift is not something that can be achieved in one appointment, and can be a slow process. Josh breaks it down –

“The first step in the process is to purposefully leave a little bit of grey regrowth around the hairline, so it starts to break up that harsh regrowth. It looks a bit more natural and helps to introduce a bit of grey gradually. If you’re going to a salon, you should talk to your colourist about having a lighter tint around the hairline for a few weeks, then introduce some kind of highlights or balayage. This will help break down the demarcation (the line between the grey and your coloured hair). It's much less noticeable to grow grey out into a lighter shade.”

If you’re the impatient type, you could try taking the plunge and cropping as close to your natural roots as possible. It might seem a little drastic, but it won’t be long till you’re loving life as a grey goddess.

We’re far more aware of the role our scalp plays in the overall health of our hair nowadays. Just like the skin on your face, your scalp needs TLC to maintain healthy hair growth and function. Choosing hair products with active ingredients like amino acids and nourishing extracts will help to strengthen your hair from the root and protect it from stress and damage.

"You have to remember that you’re washing your scalp as equally as you are your hair," reminds Atelier Expert Colourist Mads-Sune Lund. "Therefore, you should choose your shampoo as carefully as you would your skincare – if you wouldn’t wash your face with the ingredients, why would you wash your hair with it?"

Massaging your scalp daily will also stimulate blood flow to the hair follicles, encouraging hair growth and increasing the thickness and quality of your hair. 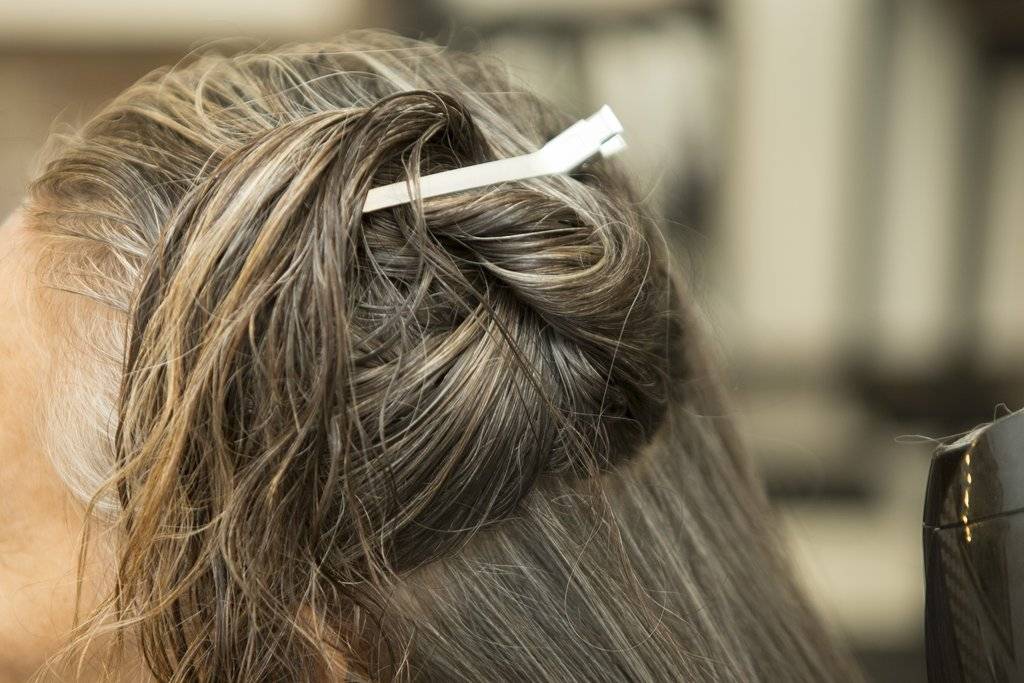 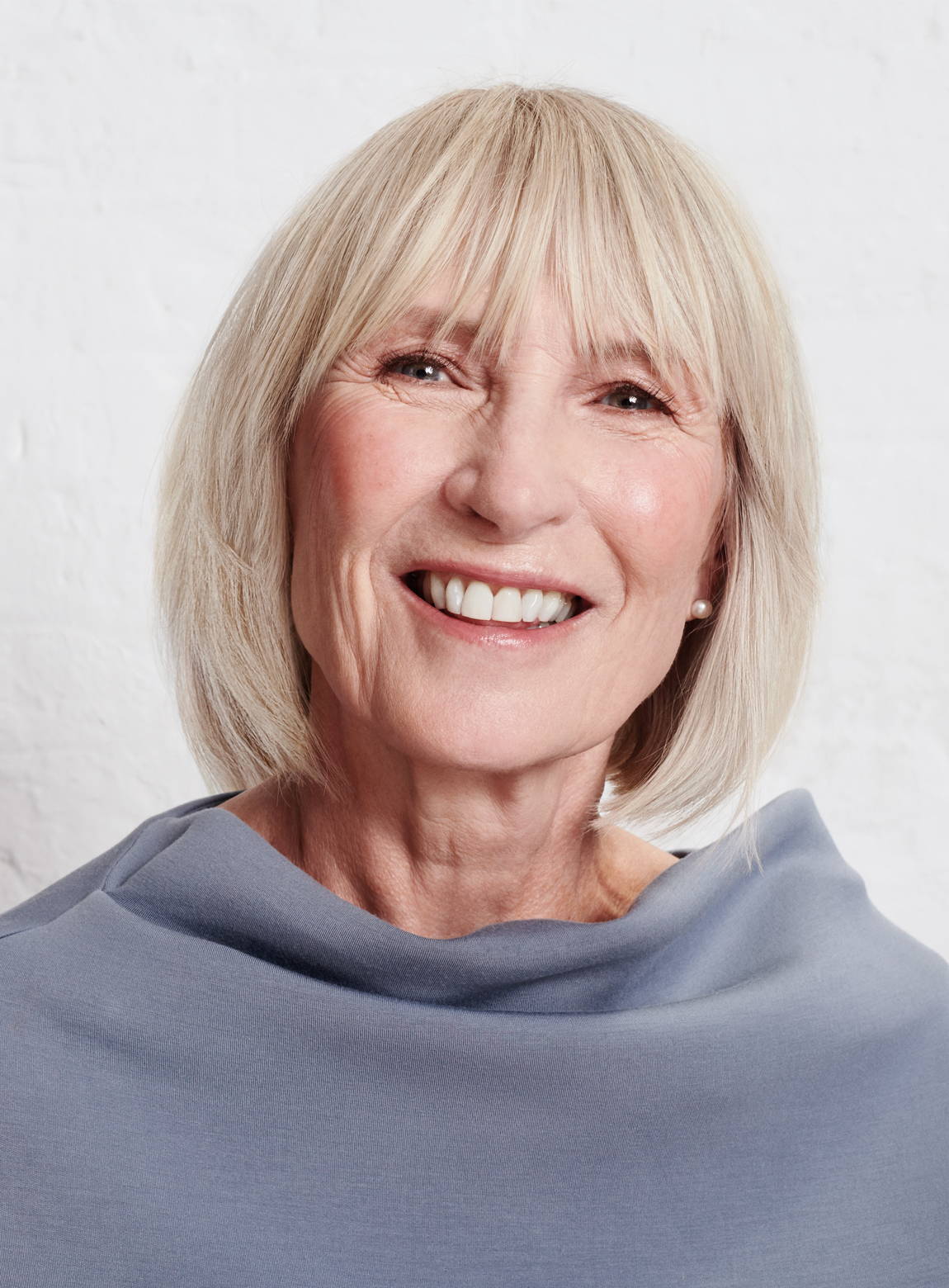 Hairsprays, hair gels, creams and hair waxes can all leave a yellowish or brassy tinge to light hair. If you maintain your grey hair, focus on hydrating your hair and using toning treatments, you might find you don't need as many products as you used to, but a good rule of thumb would be to avoid heavy or coloured hair products, as these will make your hair look dingy and dull.

“It’s always about both the right product, and the right quantity of product. Things can start looking clumpy and greasy if you use too much of it," says Atelier expert Stylist Nicholas Hardwick.

"For any hair product I’d advise starting small – use half of a thumbnail size worth of product and work your way up to a full thumbnail size if necessary. It’s easier to add more, but you can’t take it away without washing it out!”

Your cart is currently empty.

You are removing Permanent Colour and Shade Shot from your cart

From questions about your order to tailored product advice, we’re here to help. If you can’t find an answer to your question in our FAQs, please fill in the details below and we’ll get back to you in one business day.

Your cart is reserved for [urgency_time_remaining] minutes!